Grace eventually joined the staff of Food & Wine Magazine as Senior Test Kitchen Editor, where she developed and wrote many noteworthy monthly columns, such as Food & Wine Handbook; Tasting & Testing; Flavor of the Month; Power Pantry; and Chefs Recipes Made Easy. Her most recent series was Grace in the Kitchen where she drew inspiration from personal experience and her family.

Possibly by accident, Grace Parisi chose a career in food media that began more than 20 years ago. An art school grad with a degree in painting, Grace found bizarre work as a commercial TV food stylist gluing sesame seeds to hamburger buns and plumping barely cooked turkeys with mashed potatoes. Unfulfilled, Grace moved on to editorial work, food styling and writing for publications such as McCall's, The New York Times, Redbook, and  Food & Wine among others.

She's the author of 5 cookbooks, Summer/WInter Pasta, Get Saucy, a collection of more than 500 sauces which was nominated for a prestigious James Beard Award for Best Single Subject Book and Portlandia, Cook Like a Local, based on the popular show on IFC. She's currently working on a fourth. Her recipes have also appeared in numerous collections and anthologies.

Grace has had extensive national television, radio and podcast experience, appearing on The Today Show, The Early Show, CBS This Morning, Good Morning America, Chef on a Shoe-String, NY1, CNN and many more. She was the on-camera food expert for Simplify Your Life on the Fine Living Network, helping guests with creative yet simple recipes .

In the kitchen, Grace is adept in all cuisines and is an expert baker. Given a choice between sweet and savory, her response is always, "Yes, please!" In her life outside the kitchen, Grace is a long distance runner and athlete and an avid racer. She plays guitar, loves surfing, camping, gardening in her postage-stamp Brooklyn backyard and cooking for a crowd, including her husband and two children. She dreams of raising chickens, erecting bat houses and making found-object bird feeders. 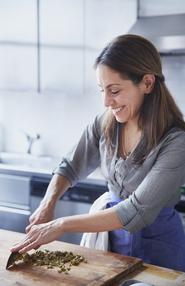